The Fiji song is ‘Go Fiji Go; Bring back the Gold from R I O’

The team ended up split for the big final, with a group of us watching with students at Basden College, and the other half with the children at St Christopher’s Orphanage. WOW! What a game, we were at the orphanage and we never heard the commentator with all the cheering and excitement. It was fascinating how much the young children knew. As the officials were announced they all responded that the referee selected was a good referee, they knew all about him!

43-7 and suddenly we were surrounded with high 10’s from the children, broad smiles, jubilation, and fireworks from the neighbouring houses. As the Fijians knelt in prayer I asked what they were saying in Fijian… ‘We have overcome, only because of the blood of the Lord Jesus Christ, and the word of God’. Then to watch them kneel to receive their medals, as we were told was customary in Fijian culture to bow lower to a higher authority, was incredibly humbling to observe. 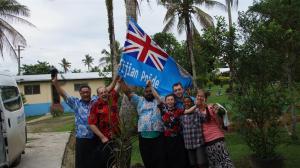 The first Gold for any Pacific Island nation. The news broadcaster said ‘it was the greatest moment in Fiji history’. By mid-afternoon it was announced that a Public Holiday had been declared on the return of the team in a week’s time! The GOLDen Oldies experiencing history with the GOLDen Fijians!