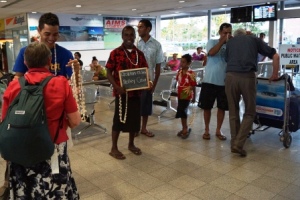 Our Golden Oldies team from Auckland were wonderfully hosted by Father Claude and the St Christophers parishioners in the Nadi airport carpark with drinks and fruit, while the ‘Southern Team’ played catch-up after leaving late from Christchurch. In fact the connecting flight from Nadi to Suva decided they shouldn’t wait for these 15 team members. Then ‘God’ entered the game through Father Claude, who is also the Nadi Airport Chaplain, and a few ‘godly words’ from him held the plane up while we hurriedly transferred to this flight!

The Anglican Projects Coordinator Joe, greeted the team as 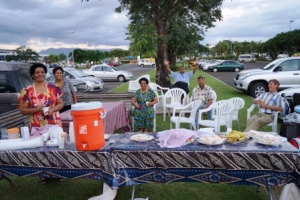 A cuppa and water mellon in the Nadi airport carpark

they arrived at Nausori Airport Suva, and Joe then became the baggage boy as he lifted all the suitcase up and through a back window in the bus, as we stacked them over the seats at the rear of the bus.

On arriving at St Johns Bible College the ‘Golden Oldies’ team were warmly welcomed by Principal Amy, her husband George, ‘Aunty’ and Emily, and the families living at the College. The team survived the long day and after a delicious meal were quickly making their retreats to their ‘dorm-setting’ bedrooms for a well-earned sleep. Sleep came easily with the annual week-long  Hibuscus festival music at a near-by park waffling through our open windows with the fan wizzing around to keep the night air down to a balmy 20C. And to our disbelief, there at 10pm on the Sunday night at this fair ground on the main stage was a Christian Church service being held  with choruses filling the night air! 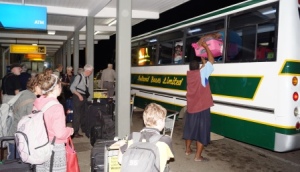 A few rose for this mornings 6am Chapel that over-looks the Suva harbour, with coastal ships navigating their way through the coral reef. An interesting discussion after the service with the College Principal about the new Fijian Constitution that is currently being written. Should it be a ‘Christian’ document? Her view was it should be multi-cultural in design to reflect the different cultures that make up this diverse nation. Christians need to respect and honour the other religions and fellowship with them and pray that God’s love will speak into their lives, not imposed upon them. If Jesus lived today where would he be spending his time?

Today, a team member Lynnette has her 82nd birthday, so with Archbishop Winston coming to officially welcome the team we may ask him to say a special prayer for her. This afternoon we head off to a remote village where the squatters on this land are hosting the team for dinner and music.

Oh I’ve been found out too, there’s only cold showers here for the team to wash in!