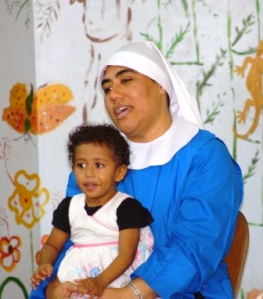 “I met a man driving taxis at the airport, and when he discovered I was an Anglican minister, he told me he had lived at St Christopher’s orphanage. He told me his Dad attacked and killed his Mum, then he got life imprisonment, so Social Welfare had him placed into the orphanage to grow up. The love of the sisters, daily routines and strong Christian teaching gave him a foundation for life. He was now happily married with a child. Without St Christopher’s he doesn’t believe he would’ve made it in life.”

This was one of the stoies told today and why the orphanage continues to receive such high recognition.

The Golden Oldies were entertained by the children with singing and dance,

“we have nothing to offer you except our voices”

and sing they did with all their heart. After a tour of the home 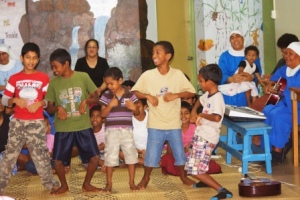 including the nursery with little cots lining the walls, the children released from formalities, took over the ghetto blaster and break dancing began. One boy’s Michael Jackson moves stole the show and was loved by everyone.Today the orphanage is attracting more children from abuse situations and its ministry to the children of Fiji is one of real Christian love in action.