God has led the Golden Oldies team, to this remote village, at this time, for a specific purpose, could not be doubted.

Maniava was one of the most devastated villages from Cyclone Winston in early 2016. 33/37 houses were destroyed. One man was lifted off the ground and tossed into the surrounding bush during the 5-hour cyclone with its jet-engine intensity noise, torrential rain, freezing temperatures, pitch darkness, and with no-where to run and hide. The Village searched for this lost man after the winds receded, finding him an hour later. They have given him a new name. He is called ‘the pilot’, who crashed landed! 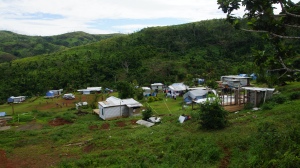 Today, 6-months on they remain living in tents, and the children walk 2-hours daily each way to school. Golden Oldie Avila heard that toothbrushes are seen as a delicacy and brought enough for each child to receive their own toothbrush.

Toothbrushes are highly prized by the children

The Mothers were overwhelmed with appreciation, and the excitement of the children said it all.

Last week we had never met Alfred.
A father with 5-children had lost his wife. A building engineer by profession and running his own business, suddenly circumstances changed and life dealt him some harsh times. He ended up on the streets until he decided to give God another chance. Now he is involved in an Anglican church in Suva. Throughout this time, Alfred had a vision. To train unemployed people to build mud-brick homes for rural villages. That vision has burned away in him for 6-years, but he had no idea where and how to bring it into being.

Roger, a ‘Graduate’ Golden Oldie returning to offer his business and financial expertise, on his first day travelled to the Suva Cathedral. Just being available to meet with people who had a business idea. Enter Alfred. He came to talk to Roger about possible projects for the Cathedral. But, his heart held his vision as well. At the last moment he revealed his mud brick housing dream.

Golden Oldies, the Church and Village Elders, meet to discuss the housing project

Events have moved quickly. The team invited Alfred to join them on their day trip to the predominantly Anglican village of Manianva. A meeting with the Village Chief and Elders debated the idea of making mud bricks. Then it moved to using them to build a ‘demo’ 2-bedroom house for an 85-year old widow in the village.
The ‘mud’ at Maniava is high quality red clay that has been tested by NZ scientists and the mud bricks are 4-times stronger than ordinary concrete bricks! The village is literally walking on a goldmine of mud! Mud that can rebuild their 33 houses, and be used to make and sell bricks in a country with a desperate shortage of building materials. After hours the meeting concluded with a commitment to trial the mud brick home construction –the first to be built in Fiji.

Graeme and Roger meet the elderly widow whom, the first house is being built for

Alfred’s 6-year vision giving new hope to people with training, employment and homes called ‘Hope Homes’ was suddenly becoming a reality. A partnership between the Village (doing the work), the Church (providing the technical and pastoral oversight) and the Golden Oldies (providing the full funding) was established. But not quite.

One last initial hurdle to overcome. We needed to present this proposal to the Archbishop of Polynesia for his consideration, approval and blessing. To ensure this was acceptable to the overall Church. A man who travels constantly and has an over-booked diary of commitments and daily duties to attend, makes it virtually impossible to meet at short notice.

We returned from the 3-hour bus trip to the Orphanage early evening, and within 5-minutes of arriving back, a phone call was received from Principal Amy. The Archbishop has asked to meet the Golden Oldies tomorrow morning at 10am. We had been summoned! The 30-minute meeting lasted an hour and a half! The visionary and spiritual leader of Polynesia graciously shared his ‘Moana Anglican’ vision, the establishment of a new Polynesian Bible College and desires to see a fresh, spirit-filled move of God throughout the Pacific. The team shared their learnings and the ‘Hope Homes’ vision, with Alfred in attendance with the team at the meeting. 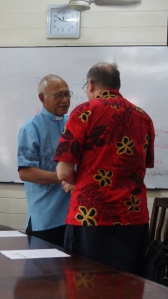 The Archbishop of Polynesia, The Most Rev. Dr Winston Halapua then stood and decreed the following:
‘I declare ‘Hope Homes’ as a new development in rural areas in Fiji, Tonga, Samoa, and throughout the Pacific. Life begins through the earth, the miracle of the earth becomes the image of Christ. The houses of Maniava collapsed to the earth, and now this new gift from the earth will bring new life in partnership with the Golden Oldies. It is a gift from God.’

This demo ‘Hope Home’ plans to be completed, and officially opened before Christmas, as the dawn of hope awakens on this serene, remote village recovering from the trauma of experiencing the worst cyclone in living history.