The woman from a squatter village fish 6-days a week, 7am to 7pm.

The team and Village people pray over the new fishing boat

Either by standing in the surf and casting their lines, or standing on a bridge and dropping their hand lines into a river below.
That was till the Golden Oldies learnt more about their hardships during their on-going partnership with this village. Now having received fundraising from many current and past team members, a new boat was commissioned to be built for them.

Roger and the ladies in front of ‘the Jolly Roger’

Not quite completed, the team and fisher ladies travelled to a remote boat workshop to see progress on the boat. It was heart-warming to think these ladies will soon have a safer way of catching fish. Furthermore, by being able to row out into deeper water, they will be able to catch bigger and more fish. That means more fish to sell and money for their children’s education and improved health. 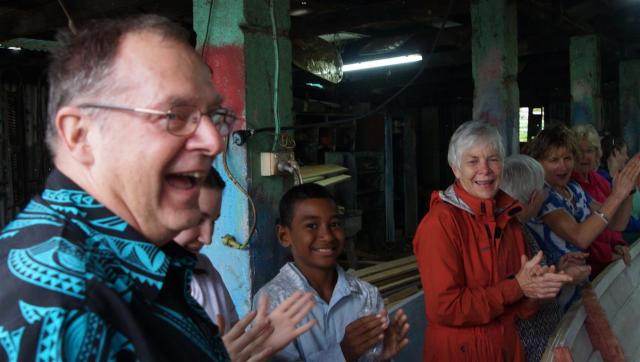 It was a shock for Roger to discover the name of the new fishing boat!

We asked a supporter and Golden Oldie Roger to officially commission the launch of the boat and announce its name. Unbeknown to him, we thought ‘the Jolly Roger’ was quite apt, and was received with great hilarity.