Last night the Golden Oldies were privileged and honoured to be hosted by a village. We were shown love, grace and inspiring fellowship as we were welcomed into this small community. 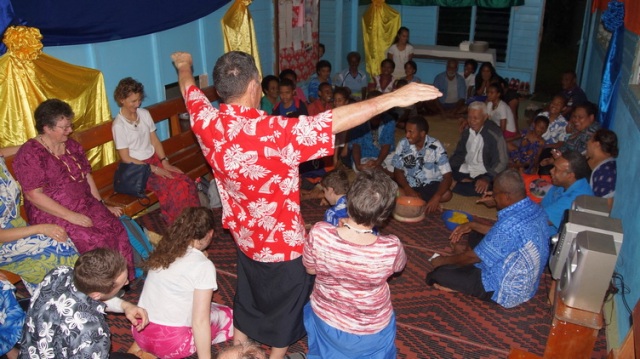 The team dramatise the bible story of Peter and Jesus on the water.

Cabiti is a small Melanesian village up a long winding hill. The village consisted of around 20 families with many attending at St. Barthelomeus church hall last night. A small, humble building that was brightened and decorated with beautiful silk fabric. They are still in the process of building and extending their church, something which we are hoping to partner with them to help accomplish -with mud bricks! 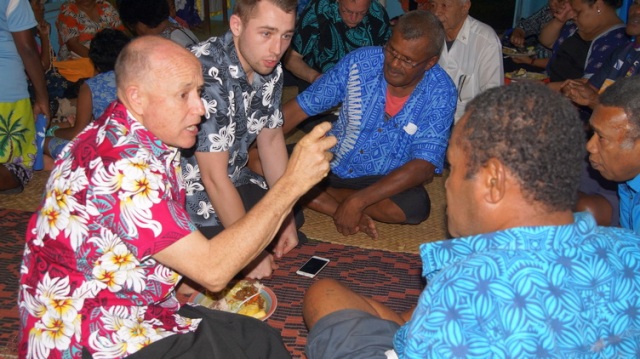 Discussing the opportunities of ‘Mud Bricks’ with the village Chiefs.

We were traditionally welcomed in the Fijian language, ceremoniously we were presented with Kava as a gift and were welcomed by the village men as they accepted us as part of their community. Some of the men of our group accepted the Kava on behalf of the group. They were then invited to sit with village Chief and Elders around the Kava bowl to discuss the villages needs and opportunities. 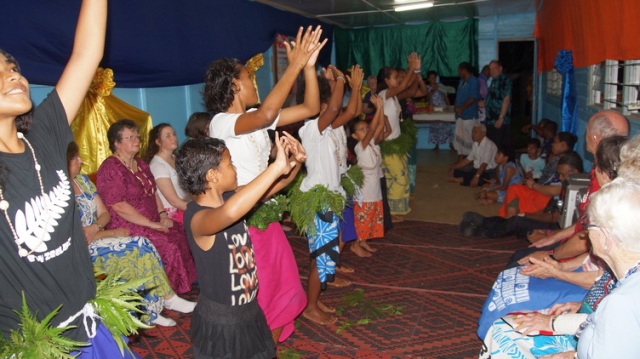 The youth showing us a traditional dance.

Then came the dancing! Some youth stood in the middle of the hall and treated us to a ceremonious dance. Halfway through the second song we were invited to join, attempting to follow the movements. You could see them brighten, laughing and smiling as these “Oldies” from New Zealand were excited at the chance of learning a traditional Fijian dance. After a wonderful dinner more dancing was held and this time the youth took us in a step by step guide. It was hard to tell whether they were laughing with us or at us – we hope it’s both!

The village women presented us with gifts of Sulu’s and shell necklaces as we said our farewells. A connection had been made with the village of Cabiti and the missson opportunites and excitement has just began!
Kylie.